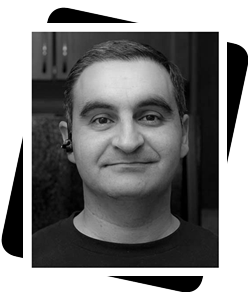 I am an Applications architect and Project Manager with experience in team leadership, large system implementations and enterprise-wide high-performance solutions in a variety of industries, including Finance, Retail, Public Safety, government and shrink-wrap software.

I provide consulting and custom solutions architecture and development services. Having worked with various organizations both small and large, in the US and Canada, both as a consultant and employee, I had interfaced with stake-holders, consultants, developers and customers at all levels. I have designed and developed retail inventory management systems, financial systems, evidence and crime scene management software, and digital document and media storage and management applications to name a few. While I am a strong leader and coach, I am also a developer at heart and love to get my hands dirty with designing and coding.

If you need a team lead to help your development team achieve its goals, need a software architect to design and help develop a new application/system or require the help of an experienced architect to help migrating a legacy application to new technology, contact me by email or phone.

Architected and developed the client’s Web and Cloud platforms and Digital Media strategy and software.

The Web & Cloud Services is a platform for providing evidence and crime scene management solutions via a subscription based model. Clients would be able to access the functionality via either a vendor-hosted Web interface or via customer-provided application utilizing a unified Cloud-based infrastructure and RESTful APIs.

Architected and developed the platform and delivered a library of RESTful Web services that can be hosted on a local server or in the Cloud.

Also, designed and developed a companion ASP.Net product to allow users perform similar functions to the desktop product from remote locations through a browser, and a Mobile solution including in-vehicle PDTs (Laptops) and several models of the Motorola barcode-equipped mobile platform devices including MC65 and MC75 running Windows CE, all of which communicated with the host server via 3G/LTE wireless connections or via synchronization once docked at the HQ.

OnQ was a document management solution running in a 16-bit environment. Many factors deemed this product obsolete from both a technological and functional perspectives. To ensure the continuing life of the product, ISS had decided to improve it by porting it to a 32-bit platform and rethinking its strategic and marketing direction. As the project manager and chief architect, my responsibilities involved:

As a consulting advisor, I helped the architecture team and business analysts set the direction and provided expertise in the various technologies being considered.

The Washington Treasury had an existing aging mainframe system that was becoming hard and expensive to maintain and enhance with new features. The office of the Treasurer published a RFP for a new system that utilized new technology. The system maintained cash, debt, investment, and portfolio information for the state of Washington. The project involved Object Oriented Architecture and Design of a n-tier distributed system utilizing UML, Visual Studio Suite 6.0 (C++, VB, Interdev...), MTS, MSMQ, SQL Server 7.0, ERWin, and Rational Rose. After 2.5 years, 3 months ahead of schedule, the system was delivered and put into production, all financial systems balanced to the penny.

En-Vue Enterprise was a Data Warehousing support application for the retail market. The application was developed in Power Builder 5.0 and Sybase SQL Server.

Allocator's Workbench was a sophisticated warehouse inventory allocation and replenishment/distribution system that generated distributions from warehouses to stores. The application involved extensive use of statistical methods to derive allocation quantities based on detailed historical sales.

This was an enterprise-wide automated replenishment and distribution system, that automatically generated purchase orders and distributions based on sale forecasts for up to 998 stores and 4 years of full SKU sales history. The system was developed in Business Basic on the DG Aviion, DG MV/AOS, and the IBM RS6000 platforms.

I have two US patents issued under my name for a unique method of building and customizing database-driven applications using a drag and drop application builder (Profiler) that is capable of producing Windows and their matching Web and Mobile applications.

CUSTOMIZABLE INFORMATION MANAGEMENT SYSTEM (US 7,599,942 B1)

Link to US Patent Site

CUSTOMIZABLE INFORMATION MANAGEMENT SYSTEM (US 8,176,093 B2)

Link to US Patent Site